One of our experts in additive manufacturing, Dr. Mikael Schuisky, will be presenting at Elmia 3D. Hosted by Elmia, the event takes place May 10-13, 2022, in Jönköping, Sweden. 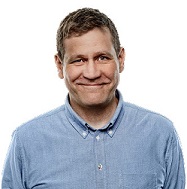 Dr. Mikael Schuisky, currently Vice President, R&D and Operations at Sandvik Additive Manufacturing, received his PhD in Inorganic Chemistry at Uppsala University, Sweden in 2000. During his PhD Mikael worked with thin film technologies like Atomic Layer Deposition and Chemical Vapor Deposition. He joined Sandvik in 2002 as a researcher working with large scale air to air PVD coatings of strip steel for applications such as bipolar plates for fuel cells. Since 2007 Mikael has held various R&D manager positions within the Sandvik Group, with focus on coating technologies. In 2014, Mikael took on the responsibility to build up the Additive Manufacturing Research Center at Sandvik, which later evolved to be a business division in Sandvik – now also including metal powder for Additive Manufacturing.

Send feedback about this page